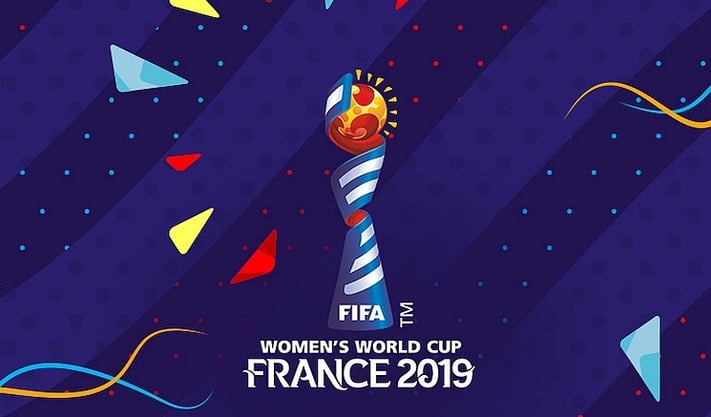 The Fifa Women's World Cup 2019 was one of the most-watched sporting events in recent years, with over 14 million viewers for the final game. It ended well for the United States, who successfully defended their champion title and set a number of records in the process. This year’s world cup was filled with exciting surprises: Alex Morgan scored five goals, Marta made history with 17 World Cup goals, and the US won with a record 13-0 against Thailand breaking the all-time goal record of Germany vs Argentina (11-0)!

Thanks to data.world and World Cup in JSON API, the stat geek in all of us can get the chance to explore the Women’s World Cup 2019 data. You can also download the data to perform your own analysis. This is always a best practice - when you invest the time upfront to get an overview of your dataset, you’ll hone your analysis and gain solid data analytics skills and mindset in the long run.

What does the dataset contain?

The data.world data set contains the 2019 player stats, including player age, country information, goal achievement, experience history, and more. The data also contains information about the all-time records, and includes all the match results since the first Women’s World Cup in 1990.

What questions do we want to explore today?

How many people attended the games in person? 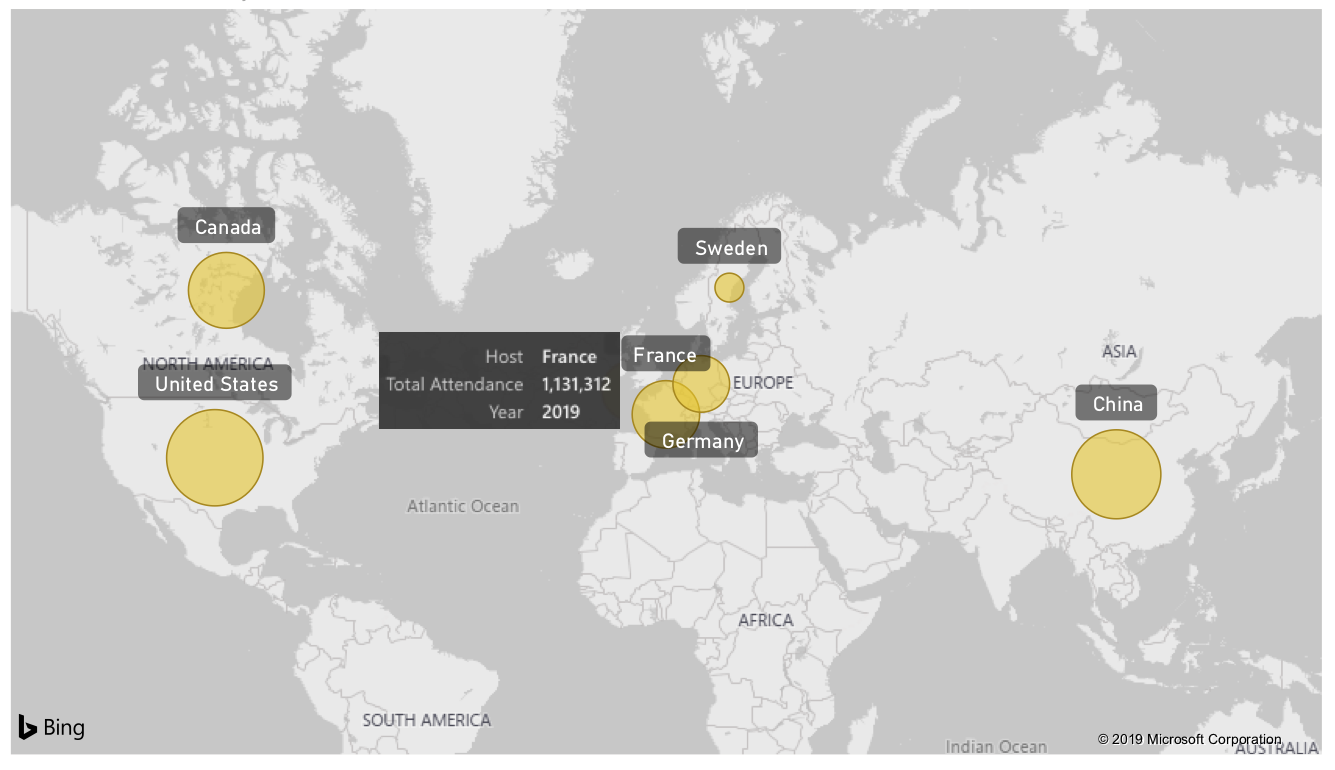 A total of 1.1 million people watched the 52 games of the 2019 FIFA Women’s World Cup in France, with an average attendance of 21,756 per game. The maximum attendance for 2019 was 57,900 people for the final game of the USA vs. the Netherlands. Interestingly enough, out of the four years with over one million in attendance, the United States won three of them. An interesting sub-question would be looking at the citizenship of the attendees to see which nations’ soccer fans filled the stands.

Who has the most experienced player in the game? 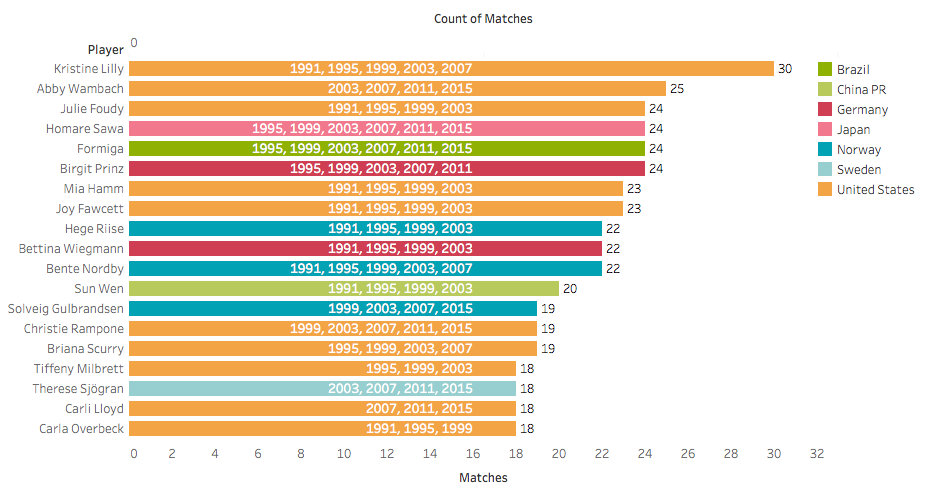 The US team has the highest number of experienced players. The top 3 experienced players are Kristine Lilly, Abby Wambach, and Julie Foudy. They played in 30, 24, and 24 matches during their World Cup careers. The United States team has 10 people who’ve been to 3 or more World Cups, which gives them a soccer career of at least 12 years.

What’s the winning rate for each team?

The World Cup concluded with the United States lifting the trophy again. The US Women’s National Team won their second consecutive World Cup, beating the Netherlands 2–0.

The last time the United States didn’t win a match in this tournament was in 2015 and the result was a 0–0 draw against Sweden in the group stage. The USWNT has now won a record 12 consecutive matches in the World Cup. You’d have to go all the way back to 2011 to find the last time that the U.S. lost a game, which was during the final match against Japan.

What’s the most popular formation strategy to win? 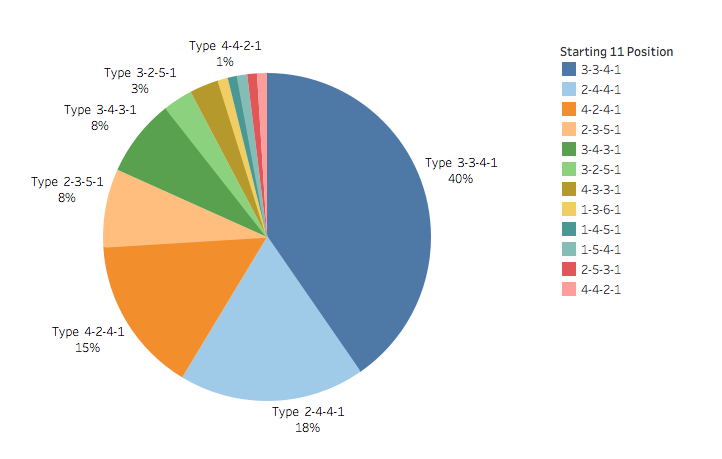 The three most popular formations in World Cup 2019 account for 74% of the total wins:

For Women’s World Cup, it seems that the strategy was more focused on the defensive line rather than offensive. Offensive formations only appeared once in the 2019 World Cup where Canada used the 4-4-2 formation and New Zealand used the 2-3-5-1 formation. Canada’s strategy paid off and they won the match with a final score of 2-0.

Did aggressiveness pay off?

If there were a prize for the most yellow cards awarded, Brazil would have brought home at least one trophy. Brazil racked up to 11 yellow cards and 59 fouls in four games. When you look at the win rates of the teams that accumulated the most yellow cards, it doesn’t seem like the best strategy. Brazil had a 50% win rate, while Scotland and South Africa had 17% and 0% respectively. Meanwhile, the U.S. and the Netherlands averaged just under one yellow card per game, which was on the lower end of the spectrum with a high win rate.

What else can you investigate?

We only scratched the service with the insights that we can find from this data. Here are some more ways that you can explore the data - don’t forget to let us know what you discover!